What makes the Boeing 737 so awesome?

Since Boeing started producing the 737 series in 1967, more than 9000 aircraft has been produced to date. Making it the best-selling jet commercial airliner in the world. Boeing has more than 4000 orders yet to be fulfilled when this blog-post is being written. It is said that on average two of these amazing machines are departing or landing somewhere every five seconds(!).

Why is it so popular?

Well, to start with, the combination of its performance, range and passenger configuration made it a good choice for several airlines. Throughout the years, Boeing has actively been listening to their customers and made improvements to meet their demands. This has resulted in a variety of models and versions of the Boeing 737, the latest being the 737 Next Generation series.

Boeing has made multiple changes and upgrades since the original 737 took flight. Including an improved wing design, upgraded "glass cockpits", winglets and more efficient engines. Continuously evolving and improving the design of the aircraft has been important in order to compete with its rival, the Airbus A320.

From the pilots perspective

It is not uncommon to hear the phrase “If it ain’t Boeing, I ain’t going” coming from an airline pilot (Guess which aircraft they fly…). Although I am unsure that an Airbus pilot would agree with that statement, it shows that Boeing pilots are satisfied with the work environment that their flight deck provides.

For people with no flying experience the cockpit might seem intimidating, with an array of buttons, switches and screens. But to a pilot, it is a purposefully designed work space where all the resources they need are presented in a logical and streamlined way.

Pilots are given extensive training in familiarizing themselves with all the systems aboard the aircraft and how to operate it. After going through all of the initial training that is required to become a commercial pilot, they also need to complete what is known as a type rating course. Which will allow them to operate one specific type of aircraft for an airline. In some cases it is possible to transfer between similar types in the same family. However, for a Boeing pilot to start flying an Airbus, a new type rating is required and vice versa.

OSMAA students in integrated programs typically train from 55 to 75 hours in our Boeing 737 Next Generation FNPT II simulator, using Standard Operating Procedures (SOP) from a major airline. This allows them to become more comfortable with handling a medium sized jet, which differs from the single- and multi-engine aircraft used for most of the training. The B737NG simulator is also utilized for Multi Crew Cooperation (MCC) and Airline Preparation Courses (Advanced JOC) at the school. This has proven to better prepare our students for type rating courses once they start working for an airline.

What is your favorite fact about the Boeing 737? Share in the comments below! 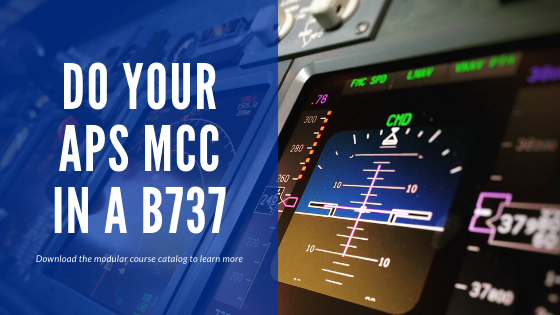