Upgrading from gas to diesel engines

Guess what? Two of our Cessna's have been converted from gas to diesel engine and there is one more in progress at the moment! OSM Aviation Academy took the decision to start upgrading the Cessna's with diesel engines since they are a better environmentally friendly option.

In this blog post, we interviewed Robert Lundström, Technical Director at OSM Aviation AirTech, who will tell you all about the converting of the diesel engines.

What is your position here at OSM Aviation Academy and how long have you been working here for?

My name is Robert Lundström and my role here at OSM Aviation AirTech is Technical Manager. I’ve been working here since 2010.

Why converting to diesel engines?

For how long has the diesel engines been in the market, is it something new?

Actually, it has been in the market for quite long now, however it hasn’t been consumed as much as today. The most successful type of diesel engine started to develop in 1999 and was in production in 2002. These engines originate from Mercedes but have developed into a well-functioning aircraft engine.

In which way is it environmentally friendly?

Modern diesel engines with high fuel pressure and turbocharging have a significantly higher efficiency than a corresponding gas engine. By comparison, the old engine has a capacity of 5.9 liters and develops 160 horsepower, while the new engine manages 2 liters of stroke volume and develops 155 horsepower.

This information is informed to the AirTech staff when converting to a diesel engine:

Are diesel engines better than gas engines and why?

The diesel engine that we consume is manufactured by a company in Germany and is a modern product that is better suited to our time with high demands on quality.

How big is the diesel engine?

In terms of size, it doesn’t differ much, but the diesel engine is somewhat heavier because it is water-cooled. The diesel engine contains 2 liters of fuel and has 155 HP.

Diesel engine unpacked from the box

Where are these diesel engines manufactured?

The engines are manufactured in Germany in a town called Sankt Egidien, the company is called Continental Aerospace Technologies GmbH.

How do you change the engine and how long does the process take?

When converting to a diesel engine, some changes are made to the aircraft's electricity and fuel system. It is a long process that is estimated to take about 200-250 hours per aircraft.

Diesel engine in the Cessna 172

Is it different to fly with the diesel engine compared with the gas engine?

The big difference is probably that the combination with a motor that is torque-resistant right from low turns and a propeller that adjusts its blade angle gives a better performance during start-up.

The turbocharged diesel engine also does not drop the power at a height that a conventional engine does.

How many Cessna's have been upgraded so far?

So far, we have converted two Cessna's but we plan to modify four more machines. We have now started the process of converting a diesel engine to another Cessna.

When we talk about environmentally options in aviation, we have seen a lot of new entrants who offers all electrical aircraft. In April 2019, OSM Aviation Academy found an aircraft manufacturer and placed an order for 60 all-electric aircraft. These will be used for training to qualify pilots for the future on sustainable wings.

Read more about the new eFlyer2 from Bye Aerospace and when it will be operational here! 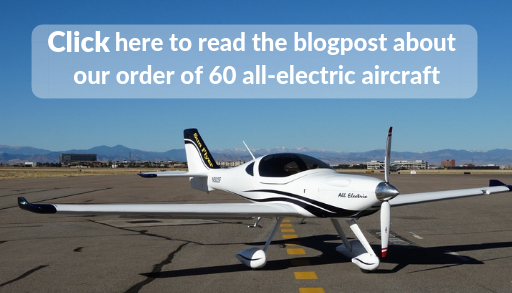