HOW TO BECOME A PILOT, STUDENT PILOTLIFE
Lana Rasool
27.09.19

In this part, Tim shares his story about why he decided to become a pilot at OSM Aviation Academy after being a gyrocopter flight instructor, a skydiver and working as a chief instructor for Qatar’s coast guard! He also gives great advice for you who is considering becoming a pilot.

Have you read part 1 of Tim Morell’s journey before he decided to become a pilot? If not, then click on the image below to read his inspiring story. 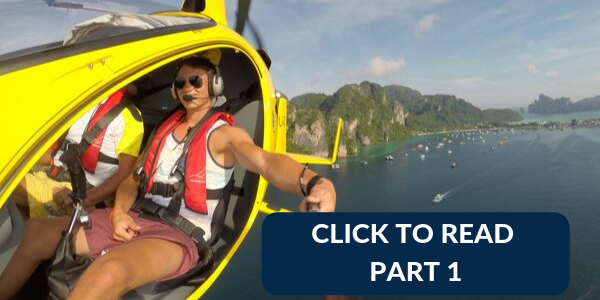 Until that time, Tim had never really been interested in becoming an airline pilot, he was more interested in the helicopters and that side of the aviation.

"However, in Qatar, Qatar Airways is a major thing, the aviation and especially the pilots in Qatar are looked up to, it is a high-end job and you are very respected if you are a pilot or work for Qatar Airways. I met a lot of good friends who are working for Qatar Airways, that made me become even more interested in aviation."

OSMAA had the best reputation, everyone knew about the academy, people from Sweden that I knew in Qatar, had done their training at OSMAA/SAA and was really happy about their experience from the academy."

"That is when I started to look for a way of maybe getting my airline training... then I found out about OSM Aviation Academy (at that time SAA, since I did my application back in 2017)! I knew quite a lot about the aviation in Sweden, and for me, it was no other school that I was interested in, in Sweden. OSMAA had the best reputation, everyone knew about the academy, people from Sweden that I knew in Qatar, had done their training at OSMAA/SAA and was really happy about their experience from the academy."

Tim and Section Head of the Coast Guard in Qatar

Why he didn't consider becoming a commercial pilot before

Tim said that the reason why he didn’t want to become an airline pilot was because he didn’t believe he could do it and he knew it was really hard to get admitted to the program and being able to accomplish it. It was not until his friends in Qatar encouraged and convinced him to give it a try.

"I mean... yes of course it is not for everyone. However, if you want it with the help and support from the school, and the quality of the learning material today, I think it is an achievable goal for a lot of people." he said with a convincing voice.

"I hope that especially girls would get more interested in it. I trained girls as an instructor and I know how good they are in the way of mentality wise. Guys have a total different way of thinking that girls don't have, the “macho and show off” doesn’t exist in most girls, that's why I think it's important that more girls get into the aviation industry, they are really precise and want stuff to be done in the correct way, rules wise as well."

Tim knew about Västerås/ESOW (one of OSM Aviation Academy’s location), since he did his helicopter training there. Therefore, he is pretty familiar with Västerås Airport that is known to be very trafficked.

"The school is situated in a perfect place, strategically it is one of the best places in Sweden since you are in the middle of the country, the airspace around is very busy and you have many training alternatives, for example you have Johannisberg, which is suddenly an uncontrolled smaller runway grass in Sala and you also have a long runway here. Not to forget to mention, also the way of training, you really get everything here and that’s why I chose this school since I put a lot of value into getting a great experience during the training."

Busy day at the airfield, queuing at the holding point for RWY01 at ESOW, Västerås

What is the best thing about flying?

He answers immediately "The control. Being in an environment where basically it is all up to you, you can’t blame anyone else if something happens. When you are flying, to some extent, you are in full control. If you have checked the airplane properly and do what you’re supposed to do, then nothing should happen. Also, in the way of travelling, I love travelling to new places and seeing new cultures. It is also nice seeing people happy when flying, knowing that I can give something to people by doing a good job and transporting people that is something I have always been interested in."

"Meteorology is something that has been really close to my heart ever since I was young. I have also always been very mechanically interested. I'm a little bit less good at remembering numbers so air law has been a bit hard. I mostly like meteorology, it is knowledge that you can use everyday, it is not only for aviation. I have always been interested in weather, when I was a child, whenever there was a big thunderstorm at night, I would go and make popcorn then go out and sit on the balcony and just watch the thunder" he said while smiling.

Tim during one of  his first solo flights

What is your favourite aircraft?

“The helicopter” he said without even thinking about it for a second. “I have flown and still current on approx 12 different aircraft (gyrocopters, fixed wing aircraft and ultralights) and the R44 helicopter, but if I would be able to fly anything that I could choose from then it would probably be the Airbus 125 helicopter/AS350 Squirrel. We will see, I don’t know how to fly the big guys yet. And of course, the skydiving, flying my own body is absolutely one of my favorite things to do.”

Advices from Tim to everyone considering a career in aviation!

If you have the slightest interest in the aviation world then:

Are you interested in becoming a pilot? Click on the image below and take the test to discover if you have what it takes...

It is a crispy sunny winter morning. From the Cessna 172 in the blue sky, you can see him glancing down and seeking for the perfect spot to surf. The airplane lands smoothly… and out comes Magnus Stokke ... Apr 02
Read more

Learning to fly in Sweden

As I flew over the snow-covered forests, with the setting sun reflecting deep purples from the network of lakes below me, I realised just how lucky I am to fly in such beautiful and picturesque surroundings. ... Mar 18
Read more

Welcome to Pilot Open Day at our base in Arendal, Norway!