On April 12, 1961, Soviet cosmonaut, Yuri Gagarin, made history at the age of 27. Gagarin became the first person to travel into space with the Vostok 1, completing a single orbit of Earth in approximately 108 minutes. Now 60 years later, Gagarin’s journey is still regarded as a key moment in space history that paved the way for all future space endeavors that followed.

The first person to travel into space

Gagarin was born in 1934, in the Russian village of Klushino. He later joined the Soviet Air Forces as a pilot and was stationed at the Luostari Air Base, near the Norwegian border, before his selection for the Soviet space program. After the Soviet Union decided to launch a human being into space, a secret nationwide selection process was started in 1960, and Gagarin was chosen with 19 other pilots. Gagarin was further selected for an elite training group known as the 'Sochi Six', who would make up the first cosmonauts of the Vostok program.

In April 1961, Gagarin became the first human to travel into space, achieving a major milestone in the Space Race, launching to orbit aboard the Vostok 3KA-3 (Vostok 1).  Gagarin became a national hero and was awarded many medals and titles, including Hero of the Soviet Union, his nation's highest honor.

Looking at the earth from afar you realize it is too small for conflict and just big enough for co-operation. - Yuri Gagarin

Following his spaceflight, Gagarin became deputy training director of the Cosmonaut Training Centre, which was later named after him. He was also elected as a deputy of the Soviet Union in 1962 and then to the Soviet of Nationalities, respectively the lower and upper chambers of the Supreme Soviet. Gagarin became an international celebrity.

Want to read about another legendary aviator? Check out our blog post about Charles Lindbergh, the first aviator to fly solo across the Atlantic Ocean!🛫 Click here or on the image below. 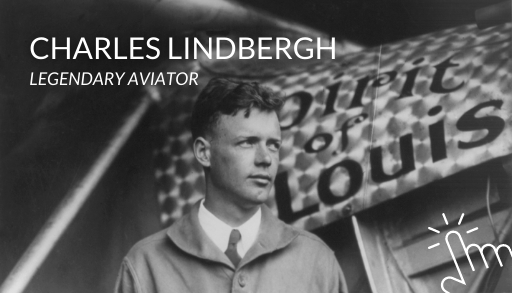