Today is International Students’ Day which we of course want to celebrate by mentioning how the students at OSM Aviation Academy contribute to the student community and school environment. We have invited two of our students to talk about how they experience their “student pilotlife”, and also, their launch of a new student council to contribute to a better school environment.

Below you have Katrin, she is 32 years old and comes from Södertälje, Sweden. She is studying in the Mentored Cadet Program 18-1 class at the moment. Katrin got chosen by the schools’ students to become the Event Planner for OSM Aviation Academy's student council.

Katrin celebrating the National Day of Sweden in school

Here you have William Nilsson, 24 years old, comes from south of Sweden and is now studying in class YH 19. He got chosen to become Public Relation Officer for the student council.

William with the Cessna 172

Katrin has done different activities in school and is now planning even more exciting events for the students. Her goal is to bring everyone together, both students and instructors, to create a community instead of feeling some sort of gap between everyone. She wants to do this type of activities to make everyone get to know each other better and feel like a part of the school.

Katrin: “I organized a movie night just a while ago which the students appreciated and liked. I also usually like to celebrate after an exam by getting candy to everyone. I’m planning on doing a ginger bread house competition between the classes now for Christmas which will be fun and also other indoor activities such as futsal and indoor hockey, which some guys came to me and requested.”

Renovating for a better school environment

Katrin: “We are also planning on renovating the lounge, we have ordered new sofas to make it nicer and cozy. We are also trying to make the kitchen look nicer, so we ordered new microwaves and some more things. This will contribute to getting an even better environment in school.”

Students hanging together during break

William: “The environment is really cool, we are in the middle of the hangar, and we got our classrooms just next to the hangar and that’s quite cool. For example if you read something interesting in the subjects that’s about aircraft and aircraft parts, then you come out to the Cessna during break and think "Yeah that’s that part I just read about and that’s how it works", pretty awesome right?”

The hangar surrounded by classrooms

Why is it good to have a student council in school?

Both Katrin and William got chosen by the students to become part of the student council which they really appreciate and are thankful for.

William: “To create a nicer environment for the students and just get to know each other since it’s a very intense education and it’s hard to find energy to gather outside school hours.”

William with his schoolmates

William and Katrin hope to continue with the student council and make it better and better so that future students can continue having a great school environment and feeling good when being in school.

It is very important to always make every student feel like they are involved instead of feeling left out. William says, “I haven’t seen people feeling left out here at our school at all. I’ve only seen people walk away by their own because they want to. Especially after a test, you usually just want to go home after, well some want to stay and talk in groups about how it went while others just want to deal with their emotions alone.”

Katrin concentrating on her studies

Katrin: “Yeah, sometimes I actually like being alone and I think others feel the same way… you just want to be alone for a while to think for yourself.”

Being a student includes mixed feelings… William says, “The positive thing about being a student is that it is very rewarding, however, it still is a lot of hard work and you can also feel stressed at certain times. But it is also a lot of fun, for example if you plan a flight or study hard for a test and succeed, that’s always very rewarding.”

Katrin with her schoolmate Mariam

Both William and Katrin think that the best part with the student life at OSM Aviation Academy is…. The flying! Not that chocking right? 😉

Here at our school, all students share the same goal, which is to become a pilot. This means that even though they have differences, there are still a lot of similarities when it comes to their interest in aviation and personality wise. William said, “I do not think that anyone here at school is really shy. You need to have some kind of social skill when becoming a pilot since it will be needed in the working environment in the future. You will be locked in a closet sized room with another person for several hours, so being able to talk to people is a requirement.”

Want to read more about how it is to be a student pilot at OSM Aviation Academy? Read the stories from our student pilots and about why they want to become a pilot:

- From Cabin Crew to Student Pilot 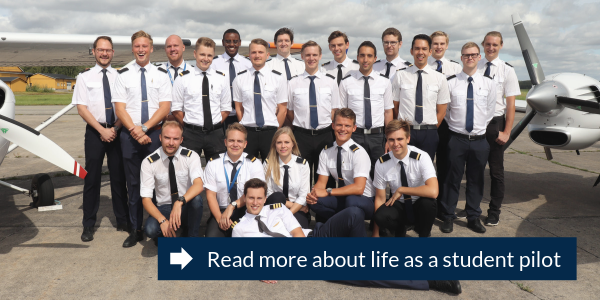 He came all the way from Dubai to accomplish his childhood dream of becoming a pilot at OSM Aviation Academy in Sweden. He is enjoying every moment of his new journey and has already created some ... Feb 09
Read more

His admiration for flying has been there during his whole life. He continued chasing his dream of becoming a pilot no matter the obstacles that came along the way. Here is William Körner, who started as a ... Jan 19
Read more

Where are all the female pilots at?

”Hello, this is your captain speaking. Welcome onboard. We are now flying to…” – you can hear from the speakers in the cabin. Have you ever thought about how rare it is having a woman welcoming you on a ... Oct 06