It is a perfect sunny Thursday morning; the sky is clear. From the left side of the school, you can hear a shiny new Cessna 172 approaching, slowly getting lower and lower, and landing beautifully. Out comes Alexandra, with a smile on her face, happy about her flight and ready to tell us about how she ended up where she is today - fulfilling her dream of becoming a Flight Instructor at OSM Aviation Academy.

Alexandra, also called "Lexie", is a 25-year-old pilot from Finland, who graduated from flight school in the USA in 2015. Her plan was to continue studying to become a flight instructor but wasn’t able to reach this goal back in 2015 due to financial reasons and a new life situation.

After gaining her Commercial Pilot License, she moved to Norway to live together with her boyfriend. Once in Norway, Alexandra started working in technical support and later took over the responsibility for training in her department.

HOW IT ALL STARTED

Lexie’s dream of becoming a pilot started when she was 4 years old (!). Both her parents worked in the travel industry during her childhood, so traveling and spending time on airplanes was like second nature.

"Back then, you could visit the flight deck during cruise. My dad was always very interested in airplanes, so it started off with me being the perfect excuse for him to go admire the buttons, switches, and most importantly, the views", she laughs, "As I got older, the excitement grew within myself as well".

She pauses for a moment, adding "I remember being four years old and pondering the amount of responsibility the pilots have. My parents have been very supportive with my career decision, so they assured me that the responsibility was nothing I couldn’t handle", she smiles.

BUMPS IN THE ROAD

Wanting to become a pilot was not considered a realistic dream by some people Lexie encountered. She was often shot down by questions like "Are women allowed to fly planes?” and ”don’t you mean flight attendant?", which only fuelled her fire. She was once even told by a guidance counsellor to pick a more suitable career for a woman, such as hospitality.

Lexie in her happy place

"Following your dreams can be intimidating to some and normally same the people are the ones trying to bring you down. When I was younger, I let it get to me, even to the point that I started looking at other career paths. As I grew older, my will to prove the naysayers grew stronger", she grinned.

Life and financial reasons got in the way of Lexie doing her instructor ratings straight after flight school. "I was 21 years old when I was done in the US and still wet behind my ears. In hindsight, I’m very glad for the life and work experience I gathered during my time working outside aviation", she comments.

Getting her Commercial License in 2015

"It was actually my previous position that reminded me of how much I enjoyed teaching and OSMAA has made it possible to combine both of my passions into a career", Lexie smiles.

Many budding pilots choose the airline path straight out of flight school instead of becoming a flight instructor, missing out on a great opportunity to gain valuable knowledge and unparalleled stick-and-rudder skills.

"As someone who has low experience, flight instructing is an excellent way for me to learn more. All my flight instructor friends have said that you learn so much when you instruct – things that will help you wherever your pilot career takes you", Lexie comments.

"I don’t know what the future holds or where my life will take me. Personally, if I enjoy my job and get enough challenges from my company, I will want to stay. I think flight instructing is a profession that will keep giving you new challenges due to the different levels and types of instructing you can do", she adds.

The course at OSMAA starts with theory, entailing some refreshers for ATPL subjects, as well as new topics such as Teaching and Learning, which Lexie found most interesting.

"As I’ve understood, it was the first time they attempted such a compact course and the theory at the beginning put everyone into a sort of survival mode”, which quickly made all of us into a team. It was an intense and shocking experience, but now that we are out of the theory phase and into the flying, we are much more relaxed", she describes.

The story of how Lexie found us is actually rather funny – it all started with Instagram, of all things! Until our interview she hadn’t told anyone that a follow on Instagram made her apply, "so let’s keep this a secret between us", Lexie says with a little embarrassed chuckle.

"In all seriousness, everything about OSM Aviation Academy seemed very professional, and everything since then has just made that picture more and more clear", she says.

She believes that a large contributing factor is choosing the right students, as well as having the right teaching methods.

"We are making the pilot of tomorrow… and that’s a huge responsibility!", as she put it.

Lexie is currently in Arendal finishing her FI course together with her soon-to-be colleagues. During her time there, she has also gotten to meet some of the students in Arendal and "backseated" some of their lessons.

"I'm so impressed with the level of professionalism the students have. There are students that have flown for 10 hours that fly and conduct themselves at a level far beyond their experience. I believe it’s a combination of good teaching methods and the best future pilots out there. I'm also incredibly impressed with the instructors, who genuinely care about the students. I didn't know this before I started here, so it was a bit of a leap into the unknown. I don’t regret anything, not for a heartbeat", says Lexie, proud of the decision she’s made.

WHAT DO YOU THINK IS THE BIGGEST CHALLENGE in BEING A FLIGHT INSTRUCTOR?

"Probably being able to adapt to different students and the different learning methods that work for them.

I’m very glad that OSM Aviation Academy goes through testing of the students before they get admitted and it seems that the students already have a very high level of motivation and often also knowledge of aviation even before they start school".

When starting the fully sponsored Flight Instructor program, you get a 100% permanent employment as a Flight Instructor at OSM Aviation Academy with a bonding of 24 months after course completion. Let’s see what Lexie thinks about that:

"Each day I get happier and happier about the decision of working here, not only for joining the flight instructors’ program, but to join the school as well! The terms that we have are incredibly fair. Yes, we might be bonded for 2 years but that's also 2 years of you having a great job – and you get to fly! You can always choose to leave and pay the remaining bond".

Lexie with a Mustang

Lexie will be the only female flight instructor in both Västerås and Arendal, which is along the lines of female representation in the pilot profession worldwide. She thinks the fact that most women don’t find being a pilot a possible career path disappointing.

"I’ve had many discussions with people in the industry on how to get women more interested as there isn’t any reason why women couldn’t fly”, she explains, “I have big hopes for the next generations, as attitudes towards women and STEM are changing. A lot of big actors are now realising that they don’t have access to all the potential out there if girls systemically don’t think they can succeed in these fields".

One of Lexie’s goals is to inspire young women and girls to spread their wings and fly. "Role models are needed. I’ve flown as a passenger over 300 times, but I’ve only had two female captains. If you never see anyone like you doing something, subconsciously you will start believing that you can’t do it either, which is why at some point in my career I’d love to go around schools to share my love for flying", she concludes.

Lexie and her classmate Kristian at OSM Aviation Academy in Arendal

Did you get inspired by Lexie and also want to become a Flight Instructor? 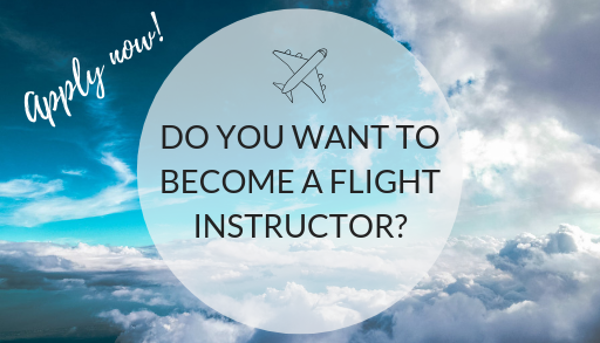 July 14 Last month, we had a talk with some of our students in Fort Lauderdale, Florida to talk about how it is to study abroad and how it is to be a student pilot in the USA. This month, we visited our flight school i...