A Snapshot in the Life of a Photo Survey Pilot

When it comes to the profession of a pilot, most people often think of an airline pilot who flies passengers safely from A to B. But there are many other career paths for a pilot to choose and a photo survey pilot is just one of them. We actually wrote a blog post about this subject where we discussed 7 Surprising Career Options for Pilots, but we didn't get a photo survey pilot on the list, which we will make up for now.

What is a photo survey pilot you might think?

Survey pilots usually fly for an organization with a Specialised Operations Permit (Part SPO) performing different types of measurement/data capture flights. The different types of data captured could be anything from photos as seen on maps, laser scanning, measurement of bedrock contents to capture samples of the atmosphere. The last summer I have been working as a pilot for Wermlandsflyg Operations as a part of their photo survey operation and would now like to share with you readers some insights from this past season of flying.

A normal day usually starts already the night before with reviewing most likely missions to fly together with the task specialist that is responsible for the actual photographing. Along with this goes also flight planning the upcoming days, flight, and coordinating areas of operations with ATC to minimize disturbance in the airspace to be flown.

The morning starts with an early weather check just around sunrise. Wake-up time will vary depending on location and time of the year. Everything from 0400 to later in the forenoon could be appropriate. This depends mostly on the angle of the sun as compared to the area to be photographed and what the minimum angle to capture photos is. It is of vital importance that the sun angle is blunt enough to prevent ground objects from casting long shadows that ruins images.

The whole morning goes with weather check, breakfast, transfer to the airport, pre-flight inspection, and flight to the mission area. All these factors must be carefully choreographed so that the aircraft and crew (pilot and task specialist) enter the first line to be photographed as close as possible to the time when the suns angle hits the minimum required angle. Too soon in the area will mean holding and extra costs related to this and too late will risk missing out on pictures later in the day as the weather might change preventing photo capture.

Another of many things that could ruin images are clouds, even though they are hanging up in the air, they cast long shadows on the ground. Not even the smallest cumulus can be present in the sky whilst performing photo survey flights. This makes some photo areas hard to “catch” since long photo lines stretching over various ground surfaces will cause varying weather and increase the risk of cloud or haze prevention.

What about those lines?

Yes, photo surveys are usually flown in straight lines running parallel over the area to be covered. Altitude, direction, and length of the line all depend on the area to be covered but are always carefully planned a long time ahead of the flight by the task specialist to ensure optimum quality of the captured data. The lines, which are fixed positions over the photo area, are then used for pilot guidance in the aircraft navigation systems to aid in positioning the aircraft on a straight and level flight path within the small margins that each photo requires to be captured.

The flying itself has during my first photo season been a healthy mix of hands-on flying and low automation modes on the autopilot. Usually are the actual photo lines flown with HDG mode on the autopilot and later followed up by steep, manually flown visual approaches. Some positioning flights were of course carried out IMC and sometimes down to low minimums, however, this was not an everyday activity. One of many advantages of flying the Turbo Commander, which is the aircraft that I am flying for Wermlandsflyg, is its capability to fly in icing conditions as it is equipped with boots on leading edges as well as a weather radar which makes the aircraft capable to fly in almost as bad conditions as the average airliner. This also applies to the altitude and speed segment, where the Turbo Commander matches most small regional turboprop aircraft.

Working as a photo survey pilot will give you a high degree of variation which in turn requires you to be flexible and on point to plan and re-plan. Chances are that you early will take the role of a pilot in command since most companies operate single pilot, alongside a task specialist that has a varying amount of experience from the field of aviation. These factors give the pilot more freedom than one might have in a “regular” A to B job.

If you want to learn more about life above the clouds, then take a look at our Airborne magazine which will give you insights into what you can expect as a pilot student and tell you a lot more about the different career options for pilots. 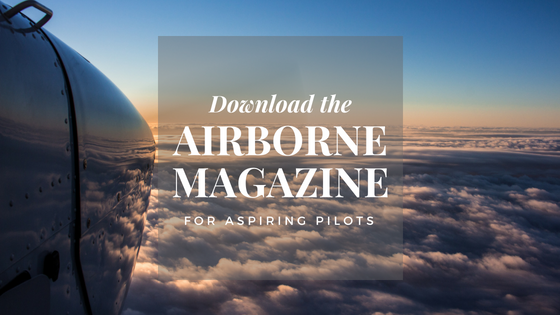